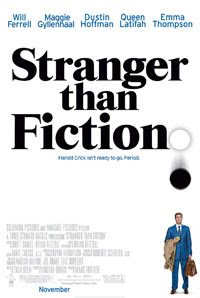 If you know how, when and why you are dying, would you simply accept it as your fate or would you find ways to cheat your death? There are two parts in this movie alternated back and forth and they are related.

Harold Crick (Ferrell) is a lonely single IRS agent who goes about his life in the most systematic way you could imagine. He wakes up on time and catches the right bus to work every morning, thanks to his cool wrist watch. He is also all about numbers, from how many stroke of the toothbrush right to how many steps to the bus stop. Ask him a mathematical sum and he'll give you the answer within seconds.

One day he heard a woman's voice, narrating what he is actually doing. He tried to brush it off as his imagination but as the narration was totally spot on in accurately describing his life, he knew it was more than that. When he heard a line mentioning his imminent death, he simply could not leave it to chance and seeks the assistance of Professor Jules Hilbert (Hoffman), a professor in literature. Meanwhile, Harold also met and fell for Ana Pascal (Gyllenhaal) during a case he was auditing. From the narration, he also knew that Ana actually do have a heart for him too. As his life turned for the better with a new found love, he refuse to submit to his so called 'fate' and decides to find a way to cheat his own death.

In the other part of the story, we were introduced to Kay Eiffel (Thompson), an author who is having a writer's block and her new assistant, Penny Escher (Latifah). Penny was sent by the publisher to help Eiffel finish her new book. Eiffel was having problem finishing the last part of her book and that is on how to kill off the main character, as with all her previous books.

In between, we were shown the life of a boy with a new bicycle and a woman who found a new job. We were left clueless as to who they were or how this two character fit in this already weird movie.

Ferrell in my opinion, although not bad overall, was not the best actor for the character of Harold. I don't find myself feeling sorry for him. Hoffman was wacky, as he was in most of his other movies that you get tired of. Latifah was practically not important at all. Gyllenhaal was charming as Ana, a girl anyone would fall for. The star of the show however definitely has to be Thompson, who played a writer driven crazy, just like anyone under pressure.

I personally love this movie because this is the kind of movie that an aspiring movie maker can attempt without a huge Hollywood budget. The idea itself is intriguing enough to come out with a storyline that can fit a standard movie length time. I also love how everyone is finally related somehow or another with many clues scattered throughout the movie, if you bother to look out for it. Finally, it is just unique, fresh and pretty weird. Forget about reality for once and delve yourself into the whatifs. Won't life be boring if no one ever what give a thought to 'What if...?'. Creativity would be dead.

Having said that, I actually do not like the ending. I can only guess that it is because this is Hollywood. I still recommend it though.
Posted by Azacamis at 11:25 PM